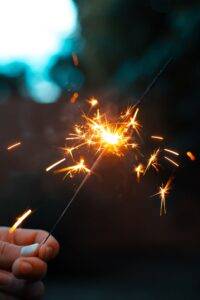 Mid-drought and wildfire season means Utah is cracking down

“Fun” Fact: The firework that burns over 2,000 degrees fahrenheit and injures more people than any other Independence Day explosive is none other than the sparkler. In 2019, sparklers alone sent over 900 people—mostly children—to the Emergency Room. This summer, many Utahns are flocking to the firework stands to purchase their favorite explosives—even though the drought makes fireworks more dangerous than ever. Though only 9% of fireworks-related fires are structural, building fires are responsible for nearly all of the fire deaths and most of the fire related injuries.

This year, since Utah is going through a drought, law enforcement will be putting in extra effort in cracking down on illegal fireworks. Governor Spencer Cox recently stated that those using fireworks will be held liable for any damage the fireworks cause. Typically, people are found liable when it can be shown that they’ve acted recklessly and disregarded the safety of others. If you set off homemade fireworks, use fireworks incorrectly, or set off illegal fireworks, you may be held responsible for any property damage or injury those fireworks cause.

Who Will Pay for Property Damage?

Fireworks have proven themselves to be financial hazards as well as physical hazards. The National Fire Protection Association has estimated that, in 2018 alone, fireworks caused $105 million in just property damage. In that same year, an Oregon teen was forced to pay $36 million dollars in restitution after he threw a firework into a national scenic area. And these figures don’t even begin to cover the medical bills that accumulated after firework-related injury.

Who Will Pay the Medical Bills?

Insurance may cover property damage, but who will pay for the ambulance ride, emergency room visit, and medical treatment? The majority of firework injuries are burns, and the most affected areas are the hands, legs, and eyes. It is not uncommon for the hand and leg injuries to lead to amputation, or the eye injuries to lead to blindness. The aforementioned can represent large costs that are overwhelming to think about after you’ve been injured by a firework. And firework injuries are anything but uncommon: it is estimated that, each year, fireworks will send around 9,000 people to the Emergency room.

Staying Safe during the Summer Holidays:

When the Recklessness of Others Has Cost You:

Unfortunately, not everyone follows these safety tips. Most people don’t think twice about things like setting off fireworks in the street, or using restricted fireworks. However, this type of negligence causes an untold amount of pain and suffering. If the carelessness of others has caused you bodily harm, you may have options regarding compensation. Contact Moxie Law Group to find out how we can help you find relief.