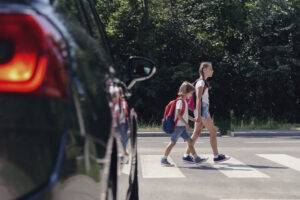 You can probably recall a time where you’ve almost hit a pedestrian. Maybe it was night and the person wasn’t wearing any reflective clothing. Or, perhaps, it was daylight and the pedestrian was jaywalking across a busy street. You might have even been the pedestrian. Tragically, many people are hit and fatally injured: nationally, over 6,000 people were killed in pedestrian-traffic accidents in 2019. And this number does not include the countless people who were critically injured in these accidents.

Pedestrian Accidents on the Rise:

Determining who is at fault can be a tricky thing in pedestrian accidents. Utah is considered to be a Modified Comparative Fault state. This means that, in Utah, an accident does not have to be 100% one party’s fault. Two parties can share fault. However, in order to have a claim, you must be less than 50% at fault. A personal injury lawyer will be able to best determine how much fault you had in the accident.

When the Driver Is at Fault:

The driver may be found at fault if they were somehow impaired when the accident occured. If the driver was intoxicated, or under the influence of drugs, they may be found liable for the injuries the pedestrian sustained. Furthermore, if the driver was distracted by texting or using a phone while driving, they may also be responsible for any injuries. If the pedestrian was using a crosswalk, the driver will likely be responsible for the accident.

When the Pedestrian Was Jaywalking:

The Utah Department of Public Safety defines jaywalking as, “crossing at any point other than a marked crosswalk if you are between two adjacent intersections with traffic lights (41-6a-1003)”. A lot of people assume that jaywalking pedestrians cannot sue for personal injury. This is untrue; motorists are supposed to look out for anything that may cross their path, including pedestrians. Also, it is important to remember that two parties can share fault under Utah’s laws.

When You’ve Been Injured in a Pedestrian Accident:

Pedestrian-traffic accidents are often confusing for all parties involved. A lot of pedestrians are critically injured and many drivers are understandably shaken up. If you were hurt during a pedestrian-traffic accident, Moxie Law Group may be able to aid you in seeking the compensation you deserve. Our attorneys understand the complex nature of pedestrian accidents and are able to help answer any questions you may have.

If you have been in a car crash, you may be wondering whether or not you need to hire a personal injury attorney. Many victims of car...